Time For Dreams - You've Got a Friend 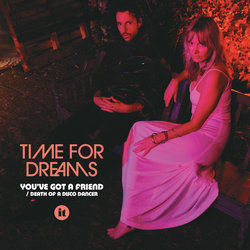 “For many years the debut album from Time For Dreams was an elusive, tantalising fantasy. It began as a conversation between two gifted artists, Tom Carlyon and Amanda Roff, and slowly evolved into a rich exchange. Thoughts and memories condensed into sound and feeling, all driven by deep dub bass lines, mesmeric melodies, vocals and beats. Each song is an invitation to follow Amanda and Tom on these journeys, travelling to nameless nightclubs where the alluring sounds of anonymous house-bands hold everyone in a state of trance. With Time For Dreams, the promise of escape is real and the holiday need never end.” SIMON WINKLER 3RRR FM

Time For Dreams is Melbourne-based duo Tom Carlyon on guitar/ beats and Amanda Roff on vocals/ bass. They make evocative, sophisticated and deeply sexy pop music. Their 2017 debut: In Time was ecstatically received, very quickly selling out it's first pressing, and was long-listed for the prestigious Australian Music Prize.

Amanda Roff has sung backing vocals for Dan and Paul Kelly, The Ukeladies, The Drones, Moon Rituals and Harmony.


You've Got A Friend (named as a homage to Carole King) was written during a time of depression, loneliness and general disillusionment with the human race. A tiny tale of kindness and friendship in a world of violence and apathy.