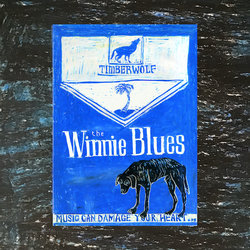 Timberwolf is the moniker for Christopher Panousakis, a young singer/songwriter from Adelaide, South Australia.

Taking a different approach to writing his first full-length record, and unlike the past, Timberwolf drew from different soundscapes and inspirations, and discovering the true meaning of vulnerability through simple songwriting and life experiences.

Since then, Timberwolf has been working hard towards finishing his 'yet to be named' debut full length record, frequenting trips between L.A, co-writing with musicians including Jim Fairchild (Modest Mouse), Tommy King (Haim, Madonna, Brandon Flowers), and The Grove Studios on Australia's Central Coast in New South Wales, where he has been recording and producing the record.

"For the first time in my life I've found a way to write music which is not fitting for any genre, but which is for the pure sake of transparency and what is unique to me. I've never been further away from anything you could call folk music and it feels great"


“The Winnie Blues” is one of those songs that hits you instantly between the eyes with its sheer “Aussie Larrikin” witty lyrics and tone. The song is reminiscent of the iconic tunes from the 1980’s where storytelling about the Australian way of life was celebrated.