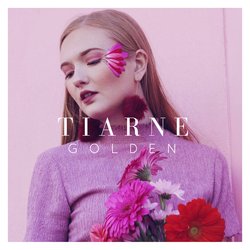 Tiarne, with her captivating and honest sound that gets underneath the skin and ignites a sentimental, heart palpitating feeling, is a 20 years young Electronic/ Indie/ Pop artist from Brisbane who is releasing her first follow up single ‘Golden’ since her debut in March.

When Tiarne’s debut single ‘Kids’ was released in March, it was immediately added to Unearthed Digital Radio, played on community radio stations across Australia and local ABC Brisbane Radio.

“What an absolute darling of a track” 4/5 Stars (Claire Mooney, Triple J) [About single 'Kids']

Since Tiarne has participated in the 2017 Brisbane QUBE Effect where she was nominated as a finalist and had the opportunity to film her first live music video.

She then managed to score a spot at The Red Deer Music and Arts Festival in October alongside acts including The Preatures and The Kite String Tangle - which will be one of her biggest shows to date.

The release of 'Golden' is only a teaser of what is to come from Tiarne's debut EP being released in October - more TBA.


‘Golden’ is a soft, sparse and freeing track that showcases Tiarne’s honeyed vocals. Starting off with an intro on guitar and keys that ascends into a pulsing electronic beat with synths and guitar that lay underneath her catchy chorus melodies.