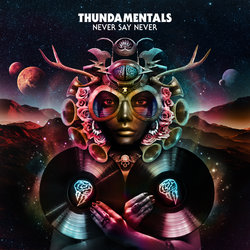 Recent world premiere of Thundamentals new track 'Late Nights' on Blue Mountains Radio (the first community radio station to play a Thundamentals track ever), is the first taste of new music from DJ Morgs, Tuka, Pon Cho and Jeswon since the release of their critically acclaimed album So We Can Remember.

It was their debut album Sleeping On My Style (2009) that brought the lads onto the radar of the wider hip-hop community, thanks to the singles Move It Up and Thunda, which radio were quick to embrace. But it was the aptly titled Foreverlution (2011) in that the band truly began to show that they were as eager to push boundaries as they were to give fans a great night out. Three years later their 3rd LP So We Can Remember, sprouted massive singles: 'Smiles Don't Lie" "Something I said (feat. Thom Crawford)”, "Quit Your Job" "Got Love feat. Solo" and “Missing You” and also brought them chart success - debuting #1 position on Digital, Independent, Australian & Urban ARIA Album Charts and #3 on the ARIA Album Chart.


Blue Mountains via Newtown hip-hop heroes Thundamentals, have emerged from the studio with a brand new offering in the form of their latest single Never Say Never; the second taste of new music this year from Thundamentals, following 'Late Nights'.