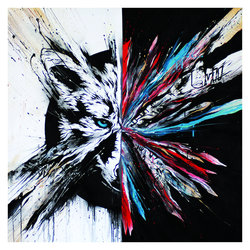 This grungey 90's influenced four-piece has exploded onto the Melbourne music scene over last few years with their unique, genre-bridging, alternative rock sound. With support gigs under their belt including Grinspoon, Kingswood, Twelve Foot Ninja, Electric Mary, Emperors, and even Aussie icons The Angels, "The Beasties" are rapidly establishing themselves as one of the wildest and most entertaining live acts currently doing the circuit.
In early 2014 Three Quarter Beast finally put the finishing touches on their self-titled EP recorded at Birdland Studios in Melbourne with the legendary music producer Lindsay Gravina (Jet, Living End, Magic Dirt). The combination has resulted in an dope new punk rock sound that is sure to be a breakthrough release for the boys.


"This Fox..." is a track about how drugs (while a lot of fun) can demotivate you and drag you down... but ultimately how LOVE and FOXY people can be the best motivation to drag you back up again.