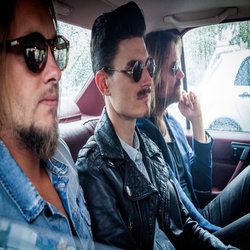 It’s been 12 years since Thirsty Merc burst onto the Australian music landscape with their first independent EP following up with three critically acclaimed studio albums, an acoustic fan favourites record entitled ‘AAA: Acoustic Anniversary Album’ and a swag of classic radio staples like 20 Good Reasons, Someday Someday, Mousetrap Heart and In The Summertime.

Fast forward to 2015 and Thirsty Merc are still excited to be making music, but all things must change and after selling over 200,000 records with Warner Music, this time around the band are tackling the recording and release of their fourth studio album – Shifting Gears - and first new material in five years, independently, and very differently.

Vocalist, songwriter and co-founder, Rai Thistlethwayte, puts it like this, “We haven’t really stopped since 2002, and being around for over a decade, we’ve got lots more experience than when we started. We’ve also got still got loads of energy, and we want to harness that energy to work hard, around the clock, to continue touring and making good music.”


For the first time in 5 years, fans will be treated to all new material, which sees Thirsty Merc return to their trademark sound. “It's fun, it's got a southern kinda groove, and it’s got those guitar figures gronking away", says Rai Thistlethwayte.