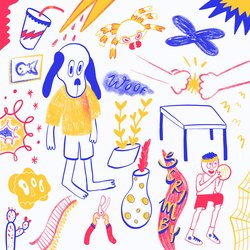 These Guy was born many moons ago, deep within the bowels of multi-instrumentalist and songwriter Joe Saxby's consciousness. Originally a solo project inspired by the late-aughts proliferation of bedroom recording artists, it grew into a three-piece in 2015, thanks to Josh Coxon (aka Simi Lacroix) and Eddie L'Estrange. Since then, a process of sonic de-cluttering has taken place, with the band gradually refining Saxby's vision into something smoother and calmer, but still aglow with an erratic, naïve expressionism.

This humble project has seen them across the Pacific, into a so-called two-year "working hiatus" spent in Vancouver BC. Through the winter of 2017-18, they holed up and worked on their craft, inspired by the city's near-constant rain and unique closeness to all kinds of nature. Soon enough though, their irresistibly affordable hometown of Brisbane beckoned once more, and they found themselves back home, fresh-faced and ready to give it another red-hot go.


'Scrimby' is meant to show our version of a journey through a psychological maze. The whole song is actually recorded and structured so that it's able to be played as a loop. This is meant to symbolise the feeling or the phenomenon of getting stuck in a cycle of anxious or unconstructive thought, the way we all sometimes do.