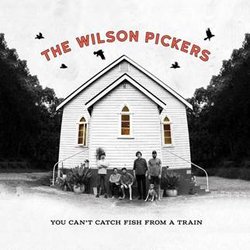 The Wilson Pickers originally started as a side project in 2009, and went on to record 2x ARIA nominated albums, The Land Of The Powerful Owl (2009) and Shake It Down (2010).

The hiatus saw the individual members return to their own projects. Salter released two critically acclaimed solo albums; Nugent formed the Melbourne duo Sweet Jean who have made two highly regarded albums; Morris continued to work with Bernard Fanning, and Bedggood worked with Kasey Chambers and Shane Nicholson amongst his numerous projects. Meanwhile, Widdicombe was a total champion and continued to make music, even from his hospital bed.


Back from a five year hiatus after beloved member Danny Widdicombe undertook treatment for Leukemia. The Wilson Pickers return with a stellar third album ‘You Can’t Catch Fish from a Train’ .