The Wednesday Night - Down In The Water 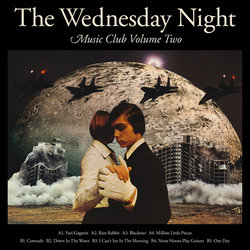 The Wednesday Night (songwriting duo and vinyl enthusiasts, Laura Murdoch and Rob Young) released their debut album Music Club Volume Two on vinyl-only in October 2016, making it very difficult for anyone that didn’t own a record player to actually hear it.

On-stage live performances of the album – featuring ace musicians from bands such as Belles Will Ring, Melodie Nelson and Spectres of Love – have been the only way to hear the songs from the album. Key performances have included The Wednesday Night supporting
Australian psych favourites The Lovetones in Sydney and Melbourne in 2017, and most recently playing both Australian Psych Fests, again in Sydney and Melbourne.


Written in a haunted house, and later recorded in the duo's garage, Down In The Water is an up-beat noir pop tale of a doomed ex-lover revealing the foreboding plot of a jilted sweethearts revenge.

Other tracks by The Wednesday Night: Blackstar Singularity