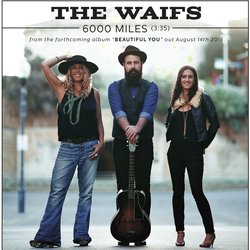 In January 2015, aided by their regular rhythm section of drummer Dave Ross Macdonald and bassist Ben Franz, The Waifs entered 301 Studios in Byron Bay, NSW with producer Nick DiDia (Bruce Springsteen, Rage Against the Machine, Powderfinger) and emerged several weeks later with Beautiful You. The emotionally raw but musically buoyant Beautiful You demonstrates the easy chemistry that has bound The Waifs together for more than two decades, as well as celebrating the depth of songwriting talent they have at their disposal.

The twelve new tracks - four from Donna, three from Josh and five from Vikki - play to the strengths of one of Australia’s most enduring and lauded folk, pop and roots outfits. There’s a familiar mix here of celebration and reflection, combined with that easy musical energy and intuition spawned from so many years of touring, whether in the pubs of rural Australia in the early days or on the road internationally ever since then. Beautiful You boasts abundant choruses, intoxicating instrumental exchanges and joyful harmonies, the characteristics that make so memorable the band’s noughties hits London Still, Bridal Train and Sun Dirt Water.


6000 Miles is the first single off the LP, a stunning Australian anthem that finds Vikki Thorn contemplating the distance between her old home in Albany WA and her new one in Utah, USA.