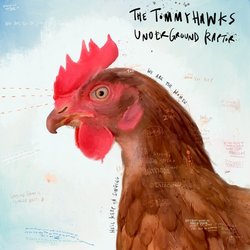 An unassuming scruffy bunch with a penchant for dogs, chooks, the beach and pizza; don’t be fooled by their chilled demeanour; once they hit that stage; these girls play hard. A fierce femme-fatale foursome with a knack for picking the shittest camper van to tour in; The Tommyhawks are a loveable rogue of a band who will intoxicate your every sense and leave you wondering whaaaat?!

Perhaps it comes from all their time on the road sharing toothbrushes and tinnies; but there’s a magic that happens when these women let loose on stage that’s earned them a reputation of being one of the best live acts in Australia. Renowned on the west coast for their super-tight, explosive live shows; they’ve got 30 festivals under their belt; more than a dozen ventures to the east coast, 3 EPs; 2 WAM song of the year nominations, and are finally releasing their debut Album “Underground Raptor” this March.

The album is like a Ferrero Rocher. The core is a gooey mess of anxiety encased in a fragile thin biscuity layer of vulnerability, rolled in chunks of paranioa, fear and panic; with a deceptively sweet coating. And fear not, it’s vegan.


Sugar is by Addison Axe and The Tommyhawks. Performed by The Tommyhawks. Produced by Dave 'Parko' Parkin at Blackbird Sound Studio in Perth. Mastered by King Willy Sound. Video shot and directed by Arlo Dean Cook.

Other tracks by The Tommyhawks: Fighting The Times  -  Shame