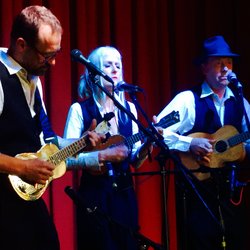 The Thin White Ukes are the world's first ukulele/ harmony tribute to the
shape-shifting prince of art-pop, David Bowie.

From Major Tom to Ziggy Stardust; Golden Years to Ashes to Ashes, rock's most radically ch-ch-changeable songbook is ripped up and restrung for deftly fingered ukes and ethereal three-part harmony.

Betty France, Michael Dwyer and Rob Stephens are accomplished string players who forged a mellifluous meeting of voices in the mid 2000s. They became the Thin White Ukes in 2014 to explore a mutual passion for crafty musical arrangements and the timeless genius of the Bowie catalogue.

They have opened for the Models and Robert Forster; featured at the 2015 Melbourne Ukulele Festival; played the 2015 David Bowie Symposium at the Australian Centre of the Moving Image; and performed at many events for the David Bowie Is… exhibition from the V&A Museum in London.

Their self-titled four-track EP was produced by Andrew Duffield (the Models).

Other tracks by The Thin White Ukes: Golden Years  -  Starman
%