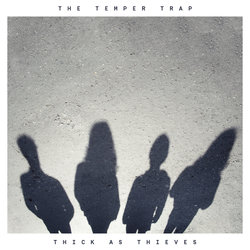 
A bold call to action, ‘Thick As Thieves’ explores new sonic territory, whilst still remaining true to the The Temper Trap’s signature sound. Fans will love it for its dynamic, layered guitar riffs, potent drum beats and intelligent, deftly delivered lyrics that rise to a tough chorus.

Other tracks by The Temper Trap: Fall Together  -  Lost
%