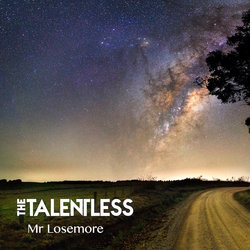 Rob began looking for musicians to transform the studio recordings back into a live soundscape. To do so, Rob enlisted Drummer Evan Lineham, Bassist Dave Seedsman and guitarist Chris Kenworthy. This project would come to be know as The Talentless.

The first single from the forthcoming album is “Mr Losemore”, a song that lyrically is a very real story of a man named Andy Losemore that Rob cared for during a three year stint doing disability care work.