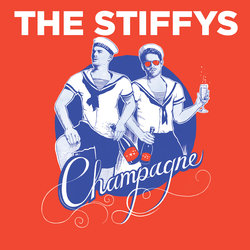 Eccentric two-piece The Stiffys have become darlings of the Australian rock scene since the release of their debut 13 minute E.P. last year. They embarked on two Australian national tours that included the Melbourne Big Day Out and supporting Bam Margera.

Jason Leigh (bass) and Adam Stagg (drums) have developed a cult online following due to their positive social messages and instructional videos, as well as their hard partying lifestyle. Their videos cover educational topics from “How to be Cool Guys” to “Kickflips’ and “Talking to Girls”.

The Stiffys have been described as ‘like Death From Above 1979 on the beach’ and a ‘must see live act’. Their second EP is scheduled for release early 2014. The first single from the new EP “Champagne” is about the band’s love for their favourite thing, Champagne.

A positive and uplifting track about funny jokes and sexy dancing, “Champagne” is a perfect accompaniment to drinking Champagne…

The Stiffys are embarking on their first national tour in August 2013 to coincide with the release of their new single. Join them for a dance and a champagne in a venue near you.


The first track to be lifted from their forthcoming second EP (scheduled for early 2014 release) ‘Champagne’ is about the band’s love for their favourite thing: Champagne.