Amrap's AirIt | Australian Music Radio Airplay Project :: Pop :: The Sticker Club - (Can You Do) The Peanut

The Sticker Club - (Can You Do) The Peanut 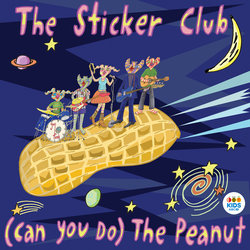 The Sticker Club formed in 2012 when Nic realised he had written a whole stack of songs for his toddlers and should put a “kids” band together so he asked his friends Alison and Ben, who had daughters the same age as his.

The band's debut album 'Scratch 'n' Sniff'' was recorded & mixed by Tim Kevin (Holly Throsby) at Tempe River Studio in Marrickville. Sixteen songs in all: from the bubblegum pop of “Darcy” and “New School Tomorrow” to the toddler-friendly “Can You Hear The Doggie?” and “Kissiasaurus” with some psychedelic rock thrown in courtesy of “(Doin’) The Echo” and “Magic Flower Power Hour”.

The band describe themselves as “a bit different to other kids’ bands because we’ve got the double wah-wah guitars and we’re quite rock and roll - kind of like 60s garage meets Don Spencer.”


A bubblegum pop dance number for adults and kids alike!