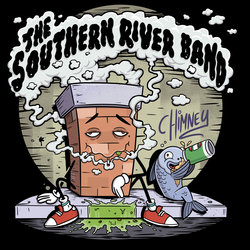 “Chimney” is the tantalising first taste of new music from WA’s The Southern River Band and a preview of their upcoming second album Rumour and Innuendo due in August 2019.

Hot off the back of a coast-to-coast tour, exemplified by two sold out shows at Melbourne’s Northcote Social Club and Cherry Bar, SRB have been connecting one-on-one with Australian music fans drawn to the guitar wielding, make your face hurt from smiling, non-stop party that is Australia’s new favourite frontman, Cal Kramer.

Produced by Dan Carroll and recorded at RADA Studios “Chimney” is a relentless white-hot boogie that doesn’t let up, a touchstone for the style of take no prisoners, high-octane, rock ‘n’ roll that The Southern River Band have steadily developed a word of mouth reputation for. With huge riffs, breakneck licks and shake your hips grooves that make you feel thirsty just listening, “Chimney” is sure to bring the fire and continue SRB’s rapid rise into the national consciousness.

With a video due in June, more new music and undoubtedly plenty more killer live shows ahead, SRB are working hard at living up to their status as one of the hottest bands in Australia right now.


Feel good, make you smile, relentless high octane, guitar driven rock and roll to get you in the mood to party