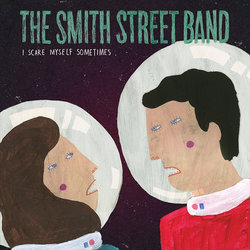 Throw Me In The River, the third LP from Melbourne’s The Smith Street Band is multidimensional. Full of their trademark earnest storytelling, it too serves as a snapshot of the last few years of their hectic lives. Often dark but always honest, the album is a virtual passport to their global rise, with songs written in Winnipeg, Salt Lake City, Calgary, London, New York and North Melbourne amongst other places.

It's been a huge year for TSSB, charging full steam ahead in signature Smith Street fashion. Having secured a spot on stage at the prestigious Reading & Leeds festivals in the UK and playing a packed out home show at Splendour in the Grass, the boys are keeping busy. If that wasn't enough to make your head roll, the beginning of September will see Smith Street Band set off on a huge Australian Tour, starting in their beloved home town, Melbourne.


‘I Scare Myself Sometimes (featuring Lucy Wilson)' oozes with TSSB’s trademark appeal of refreshingly frank and relatable storytelling. A slow burner, the track is sweetly bucolic in its restraint, building masterfully to their signature full-fledged sound. Wagner and Wilson’s voices are striking in their contrast, but interweave with delightful ease.