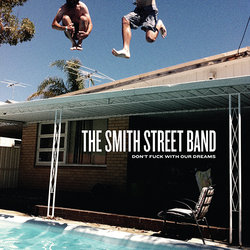 “Wagner has an obvious talent for creating earnest, intelligent punk rock songs about love, drugs, family and everything in between”
– Xpress

Melbourne's beloved party starting troubadours The Smith Street Band have had an exciting year since releasing their acclaimed 2012 sophomore album 'Sunshine & Technology'. They’ve been busy taken over stages all over the world with their infectious, smart take on modern punk rock.

After completing a marathon 30-date Australian tour, in early 2013, the band took time out to hibernate and write/record a new EP. Recorded at Sing Sing South studios in Melbourne with the talented Matt Voigt (Paul Kelly, The Nation Blue).

This EP is intended as a bridge between one album and the next, capturing the moments and events that happened during and after the epic ‘Young Drunks’ tour. Recorded live in the studio, the results are inspiring, lyrically and sonically. Titled 'Don't Fuck With Our Dreams', it'll be out on Melbourne's Poison City Records on August 9.

Following a big August 2013, Australian tour with US pals Joyce Manor and Cheap Girls, the band will embark on serious international touring. This is The Smith Street Band as bang on, honest, inspiring and energetic as usual.


Melbourne's ever hard-working The Smith Street Band present another bright, melodic punk rock tune in the form of 'Ducks Fly Together'. Instantly memorable and endowed with typically touching lyrics courtesy of frontman Wil Wagner, touching on friendship, touring, partying and love. Listen to it, and feel good.

Other tracks by The Smith Street Band: Bigger Than Us
%