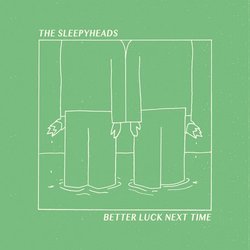 The Sleepyheads are an indie rock/punk band, formed in 2016 in Launceston, Tasmania. Their energetic, honest and catchy brand of Australian indie punk has forged connections with fans nationally, from their very first listen.

Garnering attention from themusic.com.au, Hysteria Mag and Blunt Magazine, the band was named the triple j Unearthed Feature Artist in April 2018, and has supported The Front Bottoms, Dune Rats, Frenzal Rhomb, Luca Brasi, The Bennies, Tired Lion and many more, seeing the love grow strong on the home front.

Following the release of their second EP in 2018, ‘Be More Optimistic’, the band have completed 3 national tours and have continued to build their following in Tasmania and beyond.


'Better Luck Next Time' is about coming to terms with expectations people put on you, or you put on yourself. It’s about allowing yourself to make mistakes and learn from them. Everything will probably be fine, people probably aren’t paying as much attention as what you think they are.