The Sinking Teeth - Salt and Stitches 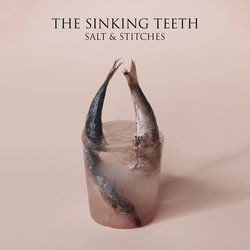 Since 2011 Teeth have been terrorizing venues across the country with their own personal brand of yelly punk and stage smack talk. Sometimes getting caught up in the party and the bullshit, but always with one eye on the eventual goal of creating something to be proud of.
Insert here the release of their debut EP White Water in late 2013, which put them on the road with a slew of noteworthy acts including Bodyjar, Luca Brasi, Kingswood & Jimmy Eat World. They have felt the enormity of the stage at The Forum in Melbourne, the intimacy of Ric’s Bar in Brisbane, and the harrowing reality of sometimes playing to no one in the middle of nowhere.
And then what? Well...life. Breakups and makeups. The drop out of the band’s original drummer, and the chemistry project involved in finding someone new to fit the mold. Adrian Van Bloom joined in 2016 to lay the concrete. Here we are at the tail end of the slacker boom but Teeth aren’t going to pretend that making an album is easy. It’s a root canal.


The single was produced and mixed by Tom Larkin (Shihad / High Tension) in Melbourne, with Jon Grace as recording/mixing engineer and Sam Sproull (Gatherer / All The Colours) mastering.