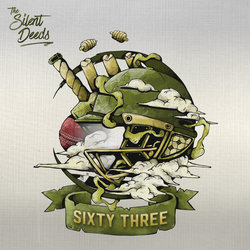 Perth quartet, The Silent Deeds, released their debut single, Rusty Chair, in October, 2015, and quickly followed it up with their first EP, Desert Town, before the end of that year. Recorded, mixed and mastered by the inimitable Andy Lawson at Debaser Studios – think Eskimo Joe, Tired Lion, End Of Fashion and many others – the release was built on rock anthems with contemporary twists and duly picked up by RTRFM, 96FM, 107.3FM, Radio Fremantle, 4ZZZ and many online media outlets.

The band have latterly been joined by Travis Brinnand on bass and vocals. He’s a handy a left-hander whose weapon of choice is a right-handed bass played upside-down. Experience and new energy have resulted in a fresh outlook on The Silent Deeds’ new single, which Brown says “phases the line between ballad and inspirational, reverb-infused, indie rock’n’roll.”

The song, Sixty Three, reflects and pays tribute to the late Australian cricketer, Phillip Hughes, who died after a ball struck him in the neck at the Sydney Cricket Ground in November, 2014.


Phases the line between ballad and inspirational, reverb-infused, indie rock’n’roll, while paying tribute to one of Australia’s most beloved sporting figures. South Australian cricketer, Phillip Hughes, died after a ball struck him in the neck at Sydney Cricket Ground in Nov 2014 - his score at that moment was 63.