The Scrims - Show Me Your Moves 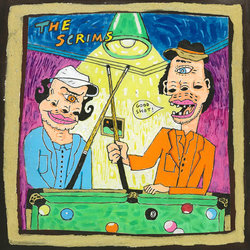 Authentic, rootsy, bluegrass and swing. Real tasty. Previously "The Scrimshaw Four", The Scrims are a high energy, Folk/Bluegrass band from Melbourne. Featuring Banjo, two Guitars, Violin, Double Bass and Stomp-box their live show will make your feet fall off from dancing so hard. Described as “Gypsy Doof Doof” The Scrims have been busking and performing almost in every location possible, up and down the coast of Australia, there isn’t a show where these five young men wont get everybody up and jiggin’ around. The band’s talent for writing quirky songs with a dark tone, all the while keeping a happy beat that gets the dance floor going has gained a huge following around Melbourne and Australia.

The Scrims have had notable gigs such as Woodford Folk Festival, Port Fairy Folk Festival, Falls Festival, The Hills Are Alive Festival, White Night Melbourne as well as multiple sold out shows around Melbourne.

New album 'Sing To Me Sweet Sunny One" released April 2017 recorded with Scott French at Lovestreet Studios in the Gold Coast and Miles Mumford at Rolling Stock Recordings in Collingwood, the album explores themes of loneliness, the excitement of new romance and the enjoyment of being by the seaside.


"Show Me Your Moves" is the rollickin' new single off The Scrims upcoming album "Sing To Me Sweet Sunny One". The song is a joyous dance classic, combining old style Jazz standard arrangement with a fresh new energy, challenging the listener to show off their best moves on the dancefloor.

Other tracks by The Scrims: Queen Of The Bay (feat. Rowena Wise)  -  Misty Mountainside