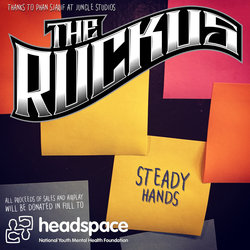 The Ruckus are a 5 piece rock monster from Australia.
Recognised for their energetic live performances, best described as visual chaos that is a mesh up of Clock- work Orange and Mad Max, accompanied by a sonic intensity that shares the same DNA that gave form to bands like Red Hot Chilli Peppers, Aerosmith and Rage Against The Machine.

The band released their debut EP, 'Let's Get Weird' May 29th 2015, to a Sold Out crowd at the Vanguard in Newtown.

The band toured and gigged relentlessly to promote the release of the EP, headlining their own shows as well as sharing the stage with the likes of Stonefield, The Baby Animals, The Radiators, Sticky Fingers, The Fumes, Skunkhour’s Del Larkin, You Am I’s Davey Lane and loads more.

Their latest release; Steady Hands, will be dropped on the 10th of October (Mental Health Day), 2015. All proceeds from sales and streaming off this song will be donated to HeadSpace.org. Headspace is the National Youth Mental Health Foundation providing early intervention mental health services to 12-25 year olds.


Based on the band members' personal experience, this song was written to elevate and motivate young people that suffer from depression. As part of the Head Space initiative, this song aligns with the topic of mental health and hopes to inspire people to overcome the lack of self worth.