The Ragtone Ramblers - Shot In The Dark 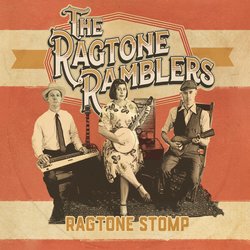 Playing in the pocket where country and jazz unashamedly mingle, The Ragtone Ramblers launch their first release. The EP, Ragtone Stomp, represents 12 months of careful songwriting and captures a sound that is both unique and strangely familiar.

The six tracks showcase a style distilled from the great hillbilly, honkytonk and western swing acts of the early 20th century with hints of jug band, Dixieland and country blues also getting a nod. The recording retains the warmth and character of the band’s vintage sound and energetic live shows.
The sweet country twang of three distinct vocalists and songwriting styles blend seamlessly against a back drop of steel guitar, slappin’ bass, tenor banjo and the rattle of the washboard.

Introduced by a mutual friend who knew they’d be great together, the band formed in early 2017, after realising they shared a common love of early American roots music and vintage instruments.

Other tracks by The Ragtone Ramblers: Carry Me Home  -  Midnight Highway
%