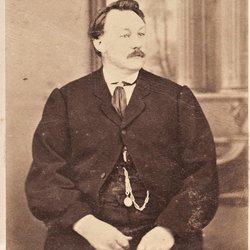 A late starter, the Queensland Tiger learnt to play piano by just playing folk songs. First song learnt was “Andy’s Gone with Cattle”, followed by many others by Henry Lawson. Ballads from the nineteenth century express the hopes, beliefs, and attitudes of people at that time, making an interesting comparison to those of today … some are different … some are the same. They also tell the history of the period.

All songs have videos on Youtube containing the lyrics, so they could be used for teaching. The Queensland Tiger rarely performs live, and has no CDs. Accounts on Youtube and SoundCloud only, plus a website


Another classic song from the Victorian goldfields, written by Charles Thatcher (1831 – 1878). The topic could not have been more controversial at the time: the license tax, and the way it was applied, gave rise to the Eureka Rebellion in 1854, so that dates this song to the early 1850s. Violin by Shannon Stott-Rigsbee.