The Public Opinion Afro Orchestra - Do Anything Go Anywhere 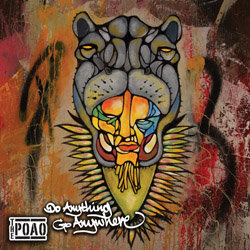 The power of Afrobeat, sizzling funk, righteous hip hop, rootsy grooves and 20 of the hottest musicians from Melbourne's booming music scene, all come together on the sublime debut by The Public Opinion Afro Orchestra.

Hot on the heels of their impeccable vinyl-only release Two Sides of the Truth/Do Anything Go Anywhere, The Public Opinion Afro Orchestra have made an album to command the attention of world music fans, hip hop aficionados, jazz cats, funk and soul freaks and indie hipsters alike.

There are strong echoes of the Afrobeat movement from the 1960s-70s, as well as the influences of the African diaspora in Australia over the past decade, yet this is boundary free, totally modern music that sounds as fresh in the clubs as on the streets of Melbourne where it was born.


A 9-minute afrobeat ride, Do Anything Go Anywhere features verses from both Melbourne's own 1/6 (winner of the Hilltop Hoods Initiative 2010) and Tumi (who was recorded by the band on a visit to Africa in 2009). Declan Jones features on trumpet followed by sage words from Lydia Acquah.