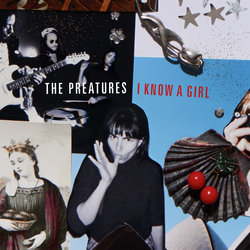 Fresh off the heels of their unforgettable set at Splendour In The Grass Festival, The Preatures have returned with the official release of their brand new single ‘I Know A Girl’. Performed live for the first time in front of an electrifying crowd at the GW McLennan tent at SITG, ‘I Know A Girl’ was premiered yesterday on Triple J.

Written by front woman Isabella Manfredi and lead guitarist Jack Moffitt, ‘I Know A Girl’ tilts its hat to the 80’s & 90’s while landing its feet firmly in the now. Produced and mixed by the talented Moffitt and recorded at The Preatures studio in Hibernian House in Surry Hills, ‘I Know A Girl’ is a welcomed return of one of the country’s most exhilarating bands.

It’s been no secret while on an 8 month hiatus The Preatures have been writing and recording new material for their follow-up to their debut Top 5 ARIA charting album ‘Blue Planet Eyes’. The album which was released in 2014 earned them popular and critical acclaim in Australia and abroad with hits like ‘Is This How You Feel’, ‘Somebody’s Talking’ and ‘Cruel’ as well as 3 nominations at the 2015 ARIA Awards.


"I Know A Girl is about sisterhood, girls' relationships and how they talk about each other" said Isabella, co-writer of the track, alongside lead guitarist Jack Moffitt. Also produced and mixed by Moffitt, the track tilts its hat to the 80’s & 90’s while landing firmly in the now.