The Pink Tiles - Time For Love 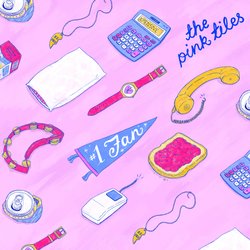 #1 Fan, doubles down on everything that made the Melbourne band’s debut so addictive. They take the California garage-pop sound and drags it screaming down the highway, switching up between insistent, gutsy rock, boldfaced power-pop, starry-eyed love songs and social commentary.

Led by Victoria de Fruita and Mara Williams, confirmed as two of Melbourne’s most ferocious front-women, #1 Fan makes its crust from irresistible harmonies and rock’n’roll swagger.

Recorded by Paul Maybury at A Secret Sound Recorders and mixed by Jim Diamond (The Dirtbombs, White Stripes, The Sonics etc), #1 Fan embodies the forefront of garage-pop, acknowledging the genre’s traditions with a rhythm section guaranteed to sway hips and rock heads, but pushes it forward with contemporary concerns and new flourishes which position #1 Fan as heir to the throne. With raunchy riffs, inquisitive lyricism and irresistible band chemistry, #1 Fan proves Pink Tiles are still top of the class.


'Time For Love' is the opening cut to The Pink Tiles' new album, #1 Fan, out March 24. A swaggering bubblegum pop affair.

Other tracks by The Pink Tiles: For Tomorrow
%