The Pink Tiles - State Of The Nation 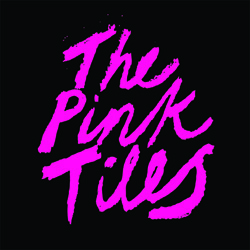 Like the Rolling Stones before them, The Pink Tiles are to the youth of Melbourne much more than a pop group. They are a way of life.

From the city penthouse to the furthest country province, young girls copy from fan magazines the bobbed hairstyle of bassist/singer Mara Williams. Desperate young men scour dank markets and internet chat rooms in hopes of finding the moccasinned shoes favoured by guitar hero Paul Maybury and at personal appear- ances, the emergence of drummer Jay Williams in nought but tight trousers and vest has driven entire forms of schoolgirls to fainting and bleeding from the nose.

Recorded at the end of 2013 at A Secret Location by Paul Maybury (King Gizzard and The Lizard Wizard, Graveyard Train, Rocket Science), and mastered by Casey Rice (Dirty Three, Pony Face), the LP is set to launch into the world this August on hot-pink vinyl lovingly co-released by the dynamic duo of Love & Theft Recording Co. and Cobra Snake Necktie Records.

The album achieves new heights in sonic fidelity, compositional mastery and essential “happeningness”. A must-have LP, to be propped beside the hi-fi system of any bachelor or bachelorette desiring romantic congress.


State Of The Nation is a protest song written in 10 minutes on election night after a long haul flight. The song may bemoan our current political landscape, but does so in such a catchy, upbeat way it's complete fun.

Other tracks by The Pink Tiles: Ordinary Girl  -  Stood Up
%