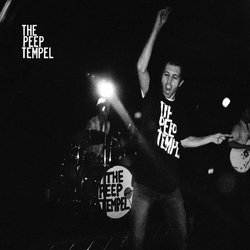 Forming in 2009 as a two piece, The Peep Tempel developed their distinctive sound in their studio/rehearsal space called the Wing Sing La. Living next door to each other Blake Scott and Steven Carter formed a musical bond that transpired into two 7 inch Vinyl releases "Thank You Machiavelli" and "Fatboy". Both 7"s were released through Wing Sing Records, and found a receptive audience on community radio and Triple J.

In early 2011 The Peep Tempel added bass player Matt Chow (of Graveyard Train) who had recorded the band's first two 7 inches and headed into Sing Sing Studios to record their debut LP with Clinton Kraus. The album was Mixed by Casey Rice as Classix (Tortoise & Dirty Three) and Mastered by Joseph Cara at Crystal Mastering. The result is a fierce energetic satire of denim, cheap cigarettes and lost men.

The Peep Tempel now perform live as a 3-piece.


Opening in a blaze of machine gun fire bass and guitar, ‘Mister Lester Moore’ tantalizingly vacillates between teeth-bared urgency to cold menace. As close to romance as The Peep Tempel get, vocalist Blake Scott croons throughout “You are beautiful my girl,” with a nuanced menace that drips with danger