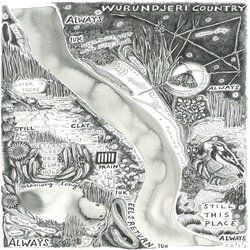 Marita Dyson & Stuart Flanagan formed The Orbweavers in 2006 and live on Wurundjeri Country. The Orbweavers' creative practice has produced evocative musical and visual works, including three studio albums, six singles and commissioned soundtracks for film, radio and television. The Orbweavers have received glowing national and international reviews for their songs and documentary soundtracks, and have performed across the country at music festivals and cultural institutions, in addition to supporting international artists such as Beach House, Cass McCombs and Julia Holter.


“Reeds / Rush” and its accompanying song map drawing were created during The Orbweavers' time as Artists in Residence at THE LIVING PAVILION, University of Melbourne. Reeds/ Rush refers to the research which accompanied the 40,000 Kulin Nation plants installed at The Living Pavilion, and to the hidden waterway, known today as Bouverie Street Creek, that traverses the University site.