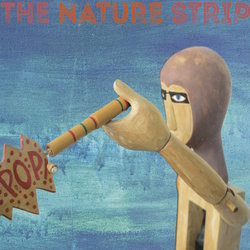 Sydney's The Nature Strip's Past Pacific EP is their fifth record since 2013 – three albums (Stars Turn Inside Out, 2013, Presents, 2016, and Beetle Bones, 2017) and an EP Plainclothes, 2014 comprising a back catalogue rich in pop smarts and sonic adventure.

Past Pacific features some classic Pete Marley pop punches in “Just Like You Do” and “Dirty Looks” and two poles of John Encarnacao’s writing in the punk-pop of “Push the Past Away” and the spacey ballad “Store of Tomorrows.” Plus an unhinged cover of Aussie post-punkers Models’ classic “Atlantic Romantic”.

It started nearly 10 years ago with Pete and John writing songs, together and separately, for what became the Stars Turn Inside Out album. The group debuted live in 2012 and consists of Pete on bass and guitars, John on lead guitar and occasional bass, Matt Langley on keyboards and guitar, and Jess Ciampa on drums and occasional trumpet. Comparisons have been made to everyone from Big Star and Elvis Costello to the Posies and You Am I.

The Nature Strip are known to a growing international audience hipped to them by influential blogs as I Don’t Hear a Single, CoolDadMusic and Absolute Power Pop.


A righteous, riotous cover of the Models tune from their Cut Lunch EP back in 1981. Recorded live in the studio, it gets into wig-out territory, with guitar and keyboard at each other like kids fighting in the car while the rhythm section drives the machine until the final destination. Are we there yet? Yes!!

Other tracks by The Nature Strip: Push The Past Away  -  Dirty Looks
%