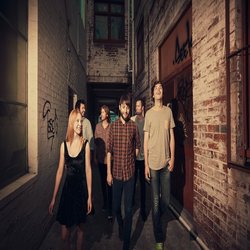 The Mornings (formally known as Samuel Cole and The Mornings) is one of Tasmania’s most well-known and hardest working bands. Not a lot of times you go to a gig of a local act and every single person in the room knows every single word of every single song… but that’s that The Mornings do.

2012 was a fantastic year for The Mornings with the release of their new single ‘Telescope’ via Triple J Unearthed and very well received national tour including dates at the Falls Festival (TAS), Festival of the Sun (NSW) and the Soundscape Festival (TAS).

As you may remember Triple J took Mornings frontman Samuel Cole to the Song Summit music conference to work with Wally De Backer (Gotye) and Adalita Srsen (Adalita, Magic Dirt) in an intensive song writers workshop. Taking the advice of these great Australian musicians on-board Sam returned to Mornings HQ to flesh these tracks out with rest of the band and bunked down at Oscars Treehouse recording studio up amongst the treetops of Mt Wellington to record some new songs that we can’t wait to share with you.


'Bleeding Knees & Salt' is the first release from EP Ribbons.