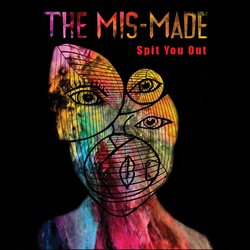 Sydney punk-rockstresses THE MIS-MADE have revealed they will be spitting out their forthcoming single “Spit You Out” on Friday 16th August with the video premiering exclusively from 9am on Thursday 15th August on THE ROCKPIT. “Spit You Out” is produced by ARIA nominee Lachlan Mitchell & mastered by Lord Tim, with the stunning psycadelic video directed by Lord Tim and filmed at Green Key Studios.

Meanwhile lead singer/songwriter Jess Finalyson (Nitocris) is on a solo jaunt around Europe this month including a set at UK/Blackpool’s Rebellion Festival off the back of her single “I Don’t Look Good On Paper” ; whilst bass legend Rexy is preparing for the birth of her first child!

Ever the prolific tourers, THE MIS-MADE have announced a few gigs when the girls are back on deck with more shows to be added through spring & summer including a NZ tour in the pipeline.


Spit You Out is a song written about surviving a controlling abusive and obsessive partner and regaining power over your own life. Its a double edged sword on being complicit in your own downfall...