The Mean Times - Be Still My Bleeding Heart 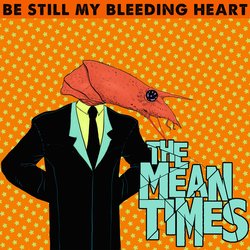 The new single, ‘Be Still My Bleeding Heart’, the second track to be lifted off their forthcoming second EP, ‘Raw Prawn’, due for release late March 2019.

‘”Be Still My Bleeding Heart is a rollicking adventure that conjures old school chase scenes, slapstick comedy and a casual distaste for dickheads. It has high energy horns and gruff vocals channelling The Saints, the greatest AFL football team of 1966 and a pretty nifty Australian punk rock band of about 10 years later.

It's both a kick in the teeth and rigorous massage, all the while, having a little go at everyone who pisses me off in everyday life. It’s an ode to the objects of my anti-affections.

From those pretending to be your mate on street corners so you'll give them money to pass onto a charity they know nothing about; to music scenesters who think they're cooler than you because they know cooler people than you and that your music is off trend; to grumpy old men who hold stubborn opinion on topics on which they know nothing and the encroaching fear that in writing songs like this, I’m in grave dage of eventually becoming one myself!”. Tom Morgan (Vocals/Guitar)


A swinging rock track with a horn section. It's a nod to The Saints