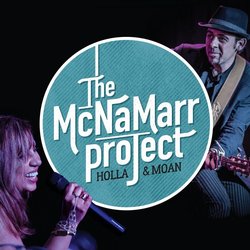 The McNaMarr’s Project’s debut album Holla and Moan might convince you that Chess records never closed; it just moved to Australia. McNaMarr combines the talents of two of Australia’s most powerful and successful blues artists, including the stunning vocalist Andrea Marr, who channels the best of Betty Lavette and Tina Turner like no other, and John McNamara, whose potent-ly authentic roots guitar and soul-drenched vocals create the perfect pairing with Marr’s scorching skills. Holla and Moan is an all-original set of soul, blues & gospel that shows off the sophisticated songwriting skills of both lead artists, support-ed by a world-class team of backing musicians and produced to perfection. Marr and McNamara already well loved in Australia, where Marr’s 2017 album Natural hit #1 on the Australian Blues and Roots Charts and the US Roots Music Report Soul and R&B charts, and racked up 4 Australian Blues Music Award nomina-tions. McNamara’s 2017 album “Rolling With It,” also hit #1 on the US Roots Music Report’s Contemporary Blues Singles chart and #1 on the Amrap singles chart, received 3 nominations at the Australian Blues Music Awards and won “Song of the Year.” The McNaMarr Project brings the sound of soul blues.


John McNamara and Andrea Marr shine in the Title Track "Holla and Moan."

An Ike and Tina vibe with the Memphis horns giving it some serious sass this cheeky tune is the classic conversation between a man and a woman "let's get to moaning' in the evening, that's the only moaning' that I wanna do"