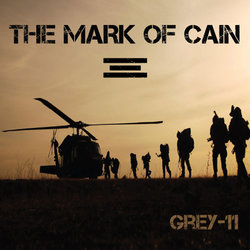 The Mark Of Cain began in 1985, as a four piece with Rod Archer on vocals. Rod left to pursue singing for The Iron Sheiks while John Scott took over singing duties sometime in 1986.

The Mark Of Cain’s debut LP “Battlesick”, became a seminal release that is still hailed as one of the greatest alternative Australian albums ever to be released. A phrase inspired by the idea that there were parallels between a non-combatant’s life and its various hardships with that of the combatant. Driven from John’s interest in military history and in particular, that of the infantryman.

Work on The Mark Of Cain’s fifth studio LP began as far back as 2006 when Adelaide brothers John and Kim Scott caught up with drummer John Stanier while he was touring through Australia with his band Battles. The desire to produce another TMOC record was strong, but the reality of geographical distance and his constant touring commitments made it logistically impossible.

Now, in 2012, four years after they began making this album, and ten years since their last studio recording, The Mark Of Cain make a triumphant return to the Australian music scene with Songs Of The Third and Fifth.


Grey-11 is the third single from TMOC's much lauded 5th album Songs Of The Third & Fifth and features Henry Rollins – recently of Double J DJ fame – in a short spoken word piece.