The Long & Short Of It - Kangaroo Rodeo 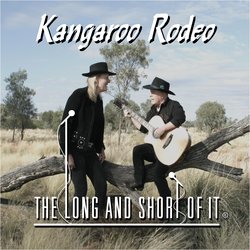 The Long & Short Of It are a multi-award winning duo from Melbourne whose well-rounded country sound consists of smart, non-formulaic songwriting, honest lyrics and superb harmonies. However, it's their live show that has really seen the duo earn the adoration of fans and critics over the last 8 years.

Their last two albums have been recorded in Nashville with Emmy Award Winning producer, Kenny Royster. “You Made Me Stronger” released in 2014, saw each single release reach Top 10 status in the Country Track Charts, indeed, “Fifty Bucks an a Case of Beer” sat at #1 for six weeks!

After that album, the duo wrote an all original uptempo, uplifting album. Kenny offered to co-write the album as he was impressed with the Aussie duo's unique style and sound. After 14 months of song writing via Skype, the finished product, “The Night Of Our Life” was produced. This album was released in late October 2016, and immediately jumped into the ARIA country charts at #5, and, ARIA Hit Charts at #3. The first single release “Jesus Money” was successfully balloted in the Grammy awards, and the second, 'Kangaroo Rodeo” a first class Hit.


The hit single, 'Kangaroo Rodeo' by The Long & Short Of It, is a light hearted song about the Aussie tradition of mates getting together to have a beer at an outback pub. “Cause when mates start shouting rounds round here, you can't just take a sip.”