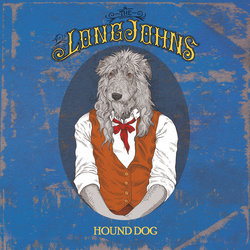 The hound dog is out, the rooster is dead; wailing on the hay bales are The Long Johns, oiling up their gears in preparation for the release of their new single ‘Hound Dog’ (Out August 24), alongside East-coast tour including performance at Caloundra Music Festival.

With their flavour of boot-stomping country-roots swag and rustic, old-timey fashion, The Long Johns are no debutants to the country scene. It was 2016 when The Long Johns released their debut EP ‘Last Man Standing’ not before launching themselves at the prestigious Woodford Folk Festival.

Since, they have appeared at countless festivals, earlier this year receiving finalist nomination in the country category at the annual Queensland Music Awards.

Continuing their goth-western barnyard tales proclaimed in the debut EP, ’Hound Dog’ is the first follow up release promising all the ingredients they’ve stamped their mark with bonus Gypsy trash and vaudeville carnage.


The new single driven by the pluck of the banjo, the blast of the sousaphone and the racket of pots ‘n’ pans, topped by the sultry howl and growl of Sian Evans. Making use of the literary technique assonance, the fast-paced repetition of vowel and consonants slurred together draw you in as those lyrics rhythmically roll off the banshee’s tongue.

Other tracks by The Long Johns: Womble East
%