The Little Lord Street Band - Where Are We - Internet Download 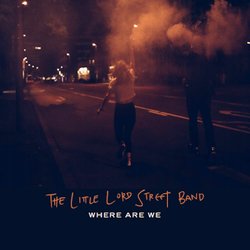 Sterling times for Perth’s Little Lord Street Band. Their acclaimed EP 'Waking Up Next To You' heralded a new wave of recognition with wins in the WAM Song Of The Year’s ‘Country’ Category (Maybe I’m Just In Love) and ‘Best Country Act’ at the WAM Awards. A beyond solid national touring schedule during that time however has only resulted in the beloved WA indie/folk/country/good-feels outfit being motivated to work harder than ever as they look ever-forward. Since forming back in 2014 The Little Lord Street Band have made their presence felt both in WA and nationally supporting artists such as Justin Townes Earle, The Whitlams, Ruby Boots, Mick Thomas (Weddings Parties Anything) Ed Kowalczyk (Live) Jack Carty (VIC) The Once (CAN) and This Way North (VIC). Festival audiences have been wooed by the band at Fairbridge Nannup Nukara Boyup Brook Country Music Harvey Dickson’s Rodeo heavy gigging leading into 2019 60 + shows touring all over Australia as a duo and the band making big impressions at APRA Songhubs Bigsound and the St Kilda Festival. Latest single 'Frankies Back in Town' released off Debut album due out in 2020 have expressed the bands fun vibes.


Whilst parked up at 80 mile beach and depicting a relationship that's a little complacent, thoughts are flying around the small space between them, thinking where are we headed, what are we doing, are we doing this right, how did we get here, do we even want to keep doing this, where are you, where are we?