The Lazys - Half Mast Blues 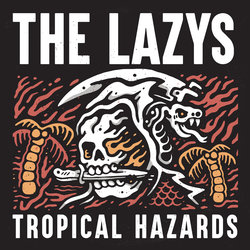 Aussie rockers The Lazys recently released their banger of a new record, Tropical Hazards, back in May 2018 via Golden Robot Records!

The band just finished their highly successful TROPICAL HAZARDS OVER EUROPE TOUR 2019 in March! This tour was covering most European markets such as the UK, Germany, Benelux, France, Italy & Spain.

The band even got invited by Germany’s most established Rock TV Format WDR ROCKPALAST to perform a TV broadcasted and worldwide and live streamed show for them!

To round out a massive 2019, the Aussie-boys are heading back to the cold north of Canada to burn the stages on their “CANADIAN HALF MAST BLUES TOUR 2019”.

As the tour title already suggested - the band will have a brand new single promoting the tour. It’s a great straight rocker and VERY funny song about a pirate fighting his erectile dysfunctional syndrome called “ HALF MAST BLUES” (on TROPICAL HAZARDS).


Half Mast Blues is a great straight rocker and VERY funny song about a pirate fighting his erectile dysfunctional syndrome.