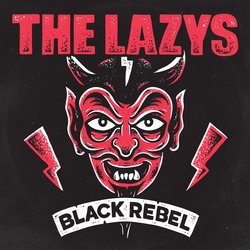 Their current single "Black Rebel" is The Lazy's second collaboration with Billy Talent guitarist Ian D'Sa, who co-wrote their debut Top 10 single "Shake It Like You Mean It" last year.

Featured on their self-titled album, the track was produced by Garth "GGGarth" Richardson (Rage Against The Machine, Red Hot Chilli Peppers, Mötley Crüe) and broke the Top 10 on the Canadian Charts, hit #2 on CBC's Rock Chart in December 2014.

Lauded with rave reviews around their trademark, high-energy live shows, The Lazys are eager to return to the stage. Their no-nonsense stage presence also grabbed the attention of Rolling Stone Magazine, who hailed them as the new torchbearers of Australian hard rock following their CMJ Music Marathon show in New York City last year.

With newly announced drummer Andy Nielsen, The Black Rebel Tour will take in 9 dates on the East Coast of Australia before heading to Canada for another 30 dates to finish off a very successful year for The Lazys.

"If 'Shake It Like You Mean It' was on AC/DC's latest album, it would be hailed as a late career classic." Rolling Stone Australia