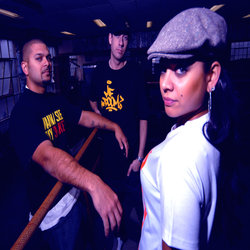 The Last Kinection and an Indigenous hip hop trio made up of brother and sister Weno and Nay, as well as Dj Jaytee.
The Last Kinection’s debut album Nutches (Pronounced Nu-tches (‘u’ as in Put), was released in 2008 and
featured heavily on triple j and community radio across Australia. The band established themselves as a serious
lyric-driven group with melodic production and a progressive hip hop aesthetic. Whilst tackling the big issues
facing Indigenous (and non-Indigenous) Australia has become part of the group’s mantra, their knack of easing
tension with great humour and captivating entertainment is what gives TLK’s personality such charm.

In 2010, The Last Kinection signed with Elefant Traks before taking out two Deadly’s for Outstanding Achievement in R’n’B/ Hip Hop and TLK’s Naomi Wenitong (Nay) also took out Female Artist of the Year

TLK were also special guest programmers on RAGE this month.