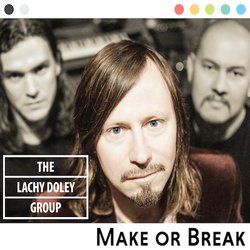 Back when Sydney had a thriving music scene, the pubs and bars fostered a heap of talent who often went on to bigger and better things. Lachy Doley moved from Adelaide as a teenager and found himself working with the cream of inner-city Sydney’s soul-funk-blues-whatever scene - which very quickly led to sideman stints with some of Australia’s biggest artists such as Powderfinger, Wolf Mother, Jimmy Barnes, Billy Thorpe and Bernard Fanning to name a few.

Since those days Lachy has gone on to be hailed as one of the most important and celebrated new Blues/Soul Hammond Organ players in the world. His killer band of Jackie Barnes (drums) and Joel Burton (bass) have built an incredible following one sold out room at a time, and they’ve become regulars on international blues, jazz and good music festivals such as Montreal Jazz, Bospop and more.

The Lachy Doley Group are proud to announce the release of their 5th Album ‘Make or Break’ and will be heading out on a national tour to get people excited about it.


After stepping onto the same stage that the previous act’s lead singer died of heart attack only an hour earlier. I was confronted with feelings of sadness, pointlessness, fear and impatience. Life is short and everyone just wants to be loved by someone but it’s a ‘Cruel Cruel World’.

Other tracks by The Lachy Doley Group: A Woman  -  Mix Tape
%