The Koi Boys - Cry To Me 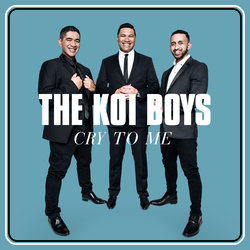 The Koi Boys made their charismatic first appearance on this season of The Voice Australia. The first ever trio to perform on the show, their energy, character, enthusiasm and genre-spanning talent made them a hit among fans, both locally and most recently across the Tasman. Knocked out before the finals. The band’s eviction caused outrage on social media and had Jessie J fielding interviews surrounding her decision to send them home.

Their passionate fans stayed with them, following their live shows and online-recorded performances. One of their videos on YouTube, a cover of Meghan Trainor’s “All About That Bass”, has racked up over a million views.

For almost a decade, the charismatic all-singing, all-dancing, all-harmonising Koi Boys, have been crooning, dancing and entertaining as a collective at their “Sunday Session” at a Gold Coast venue. Ranging from Motown classics through to current pop hits at Koi Dining and Lounge Bar, the live session has become so popular that shows sell out weeks in advance.

Meant To Be, set for release on Oct 21st, is a menagerie of songs with one ambition: to entertain, because that is the one truth that lives at the heart of The Koi Boys.


The first single and video to be lifted from Meant To Be is a big, bold cover of the 1962 soulful “Cry To Me” originally recorded by Solomon Burke then given new life in 1987 in the motion picture Dirty Dancing.