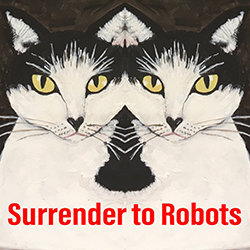 Paul Scott began his career in music, writing and playing bass in angular NZ group Pop Mechanix. Despite court cases, a revolving cast of singers and multiple record labels, their single ‘Jumping out a Window’ became a staple of New Zealand pop culture.

Relocating to Australia Paul formed Montana with Ken Stewart (Mr Blonde), Michelle Margherita and Steve Melville. Their first release featured 'Koolest Band' which received national airplay and high rotation on JJJ. A brief tour of the USA and a performance at SXSW, led to 'Koolest Band' being included in the Hollywood movie 'You Drive Me Crazy'. The subsequent album ‘Bubblegum Love’ was released in Australia, Spain, France and the USA.

Surrender to Robots was written, recorded, performed and produced by Scott: ‘So really, there’s no-one else to blame’ he says.

Song subjects include existential angst, co-habitation as a means of financial easement, optimism, missing people, mobile phone culture. Influences include a splash of Suicides’ keyboard sound, a hint of James Murphy’s indie crashes into dance music, a lick of Wren sand a dollop of the Dukes of Stratosphere vocal stylings.


A Pixies like, Lo Fi Perfect Indie Pop Tune. All the bells and whistles are here, catchy chorus, hooks in the verse and great indie band backing. To top it off the song is exactly 3mins and 30 secs long.

Other tracks by The Insufferable Paul Scott: Reach For Stars  -  We Heard It On The Radio/Golden Times
%