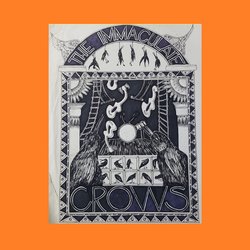 The Immaculate Crows were named by Bruce Neilsen (lead guitar, songwriter) and initially consisted of Bruce, Chris, Hamish McKie (singer), Brad Leaf-Milham (bass) and Mark Kasulke (rhythm guitar). Hamish and Mark left to be replaced by David Page and Mark Hocknell. David was possibly the first indigenous person to be a singer/frontman for an Australian alternative band and had been the first Australian signed for a Motown label when he was a teenager. The music displayed elements of psychedelia, garage rock, punk, new wave and progressive rock. Bruce founded two other guitar based bands, viz; Insurrection and The Popes and still writes songs although is not currrently performing. Sadly Dave died in 2016.

Dingo was a 2 track recording made in a single night session during which ‘Psychedelic Girl’ was also recorded. They were both recorded on 1 September 1982 in the now defunct Basement Studios in Brisbane. The lyrics and music were written by Bruce Neilsen and the lineup was David Page (vocals), Bruce Neilsen (lead guitar), Mark Kasulke (rhythm guitar and harmonies), Brad Leaf-Milham (bass) and Chris Allen(drums). The artwork was done by Keith McKeown.


Dingo was inspired by the Azaria Chamberlain story which gripped Australia for a substantial period of time. Baby Azaria was killed by a dingo on 17 August 1980 when her family camped at Uluru (Ayers Rock) in the Northern Territory Australia. Dingos are an apex predator in Australia and there have been several reported attacks on humans since Azaria’s disappearance.