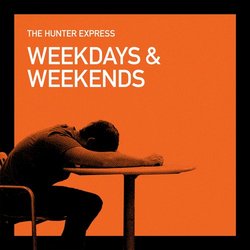 The Hunter Express is a band led by front man, Brad Ellis.

'Should Have Come On Sunday' is the band’s second full length release. Previously, The Hunter Express released their debut EP 'Bluestone Lane' in 2017 and quickly followed with their self titled debut album in 2018.

'Should Have Come On Sunday' tells a vivid story through each of its 10 tracks. A perfect listen, describing suburban Australian life, mental health, family, love, loss and death.

Ellis took a collection of songs he had written in the summer of 2018 in a small shack in Olinda, Victoria to Muinos at Newmarket Studios. Together they worked on creating what is now a beautiful body of work.

'Should Have Come On Sunday' has already travelled far and wide. After recording the songs at Newmarket, Ellis had the opportunity to mix in Santa Monica LA, at Fourth St Studios with Callum Barter, before being mastered by John Davis from Metropolis Mastering in the U.K.

The Hunter Express will release their sophomore record 'Should Have Come On Sunday' on September 6th through Ground Records.


Frontman Brad Ellis was inspired to write the track after a close friend confided in him about the ins and outs of another overwhelmingly average day at work. This song is a response to trying to negotiate making the most out of what gives you pleasure, whilst also dealing with the mundane, routine driven aspects of life.