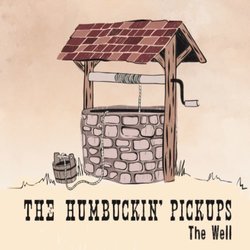 The Humbuckin’ Pickups deliver their own brand of rocking folk with rootsy undertones that highlight clever arrangements. The band formed in 2012 and have quickly gained a reputation for their humorous and captivating live performances. It is these unforgettable live performances that have seen the ‘Humbuckers’ attract national attention and a loyal, growing fan base.

In 2015 The Humbuckin’ Pickups released their debut album ‘Skullduggery’. A live studio album, the raw and heartfelt style of the Humbuckers shone through. Their track ‘Dunedin Star’ reached number three on the AMRAP regional charts in December of the same year.

From festivals such as the famous Springfest in North Queensland, Yackandandah, Maldon, Boolarra and Newstead, to pubs and clubs across Victoria, the Humbuckers have built for themselves a committed and dedicated fan base.

Most recently The Humbuckin’ Pickups have wrapped up recording of the latest album ‘The Well’ and are gearing up to tour their new release in May of 2019.


‘Long time gone’ is the song that speaks to our heart while simultaneously kicking us in the butt. It reminds us that if we want to marry the love of our life, write that book or travel those seas, then we have to ‘do it while we can – we’re a long time gone’.

Other tracks by The Humbuckin' Pickups: The Well  -  The Dancing Gate
%